"Pudding cake" (also referred to as "hot fudge cake" or "chocolate dump cake") is a creation I had never heard of before meeting my husband. He swore it was one of his favorite desserts, so I gave it a try. This crockpot version is an even-easier, hands-off take on the recipe. It makes 6+ servings.

In another bowl, mix together brown sugar and cocoa. Sprinkle evenly over batter. without stirring.

Pour boiling water over the top. Do not stir. Cover and cook on high for 2-1/2 to 3 hours.

I like being able to start this recipe before dinner guests arrive, and have it done just as we're ready for it.

WARNING: When you let the 7-year-old top the pizza, the toppings may not be distributed evenly. 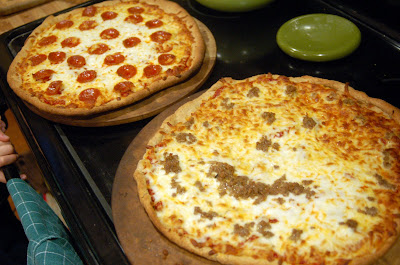 From the Archives: Wassail

I had never tried wassail, but my husband insisted it was a holiday neccesity, to I was determined to make it. I was glad I did! Adapted from the Belgian Wassail recipe from MyRecipes.

Combine cider, sugar, and spices in slow cooker. Squeeze juice from lemons and oranges into mix, and let rinds float in the cider mixture. Cook on High for 1 hour, then keep warm until ready to serve. Strain out solids.


I let a lemon rind continue to float in the wassail as a colorful garnish. The fruity, citrusy warm spiced drink was perfect to share for Christmas dinner- and made the whole house smell good!
Posted by Joanna at 9:29 AM 8 comments:

I was home sick today.

This is a rare occurrence for me. Like, I'm pretty sure it hasn't happened more than a couple times in the last 10 years type of "rare occurrence". I'm not good at sitting still at home, but today I slept & slept & slept. Between naps, I threw a bunch of stuff in the crockpot that I hoped would make me better, and then went back to sleep. Come dinnertime, the chicken noodle soup concoction was actually delicious. Here's the list of things thrown into the crockpot, and why:
What do you eat when you're sick?
Posted by Joanna at 5:51 PM 6 comments:

Both Alisse and Becca have asked, so I thought I better hurry up and explain how I went about making fresh mozzarella, mostly based off this recipe.

It all starts with milk.

That seems obvious: Cheese = milk + mold + magic, or something like that? I don't think there was any mold in my process, but there definitely was milk, and the rest seemed like magic!

So, we start with the milk: 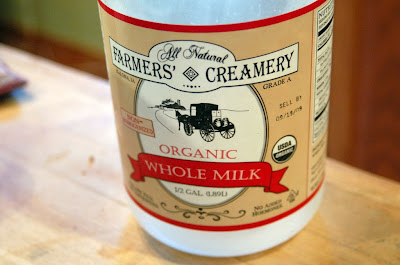 When looking for milk to make cheese out of, reportedly raw milk is best- but that's mostly illegal- and the next best thing is whole milk that is NOT homogenized and NOT ultra-pasteurized. To be on the safe side, I got whole organic milk that was as minimally processed as I could find. I bought a half-gallon because I wasn't sure how this was going to work, and I'm cheap.

The other critical supplies: 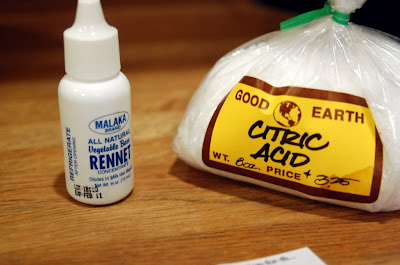 Rennet and Citric Acid.
I found both at a natural foods store. I had to ask where to look in the store- I had no idea. Luckily, I had a friend who WORKS in a natural foods store along with me on the trip, and he was able to give me some ideas. Hint: Rennet is refrigerated. 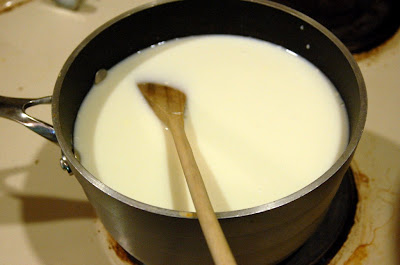 Heat to 88 degrees. I only had a meat thermometer, which is probably not the best tool, but it worked. Remove the pot from the heat and add the rennet solution. Use a wooden spoon to stir with an up-and-down motion for 30 seconds to a minute, then leave the pot alone for about 10 minutes. This is the "magic" part"

While you're stirring, the curd will start to thicken. 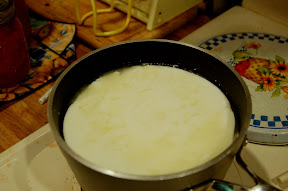 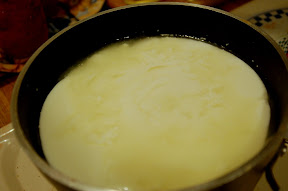 After 8-10 minutes, the pot will (hopefully) look like this: 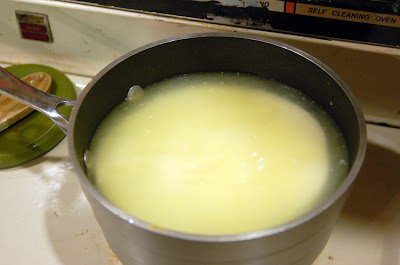 The curd pulled away from the sides of the pot and is now one big mass. Using a knife long enough to reach the bottom of the pot, cut lines in the curd to make cubes. I found out this is not as easy as the instructions make it sound. Hopefully yours will be prettier: 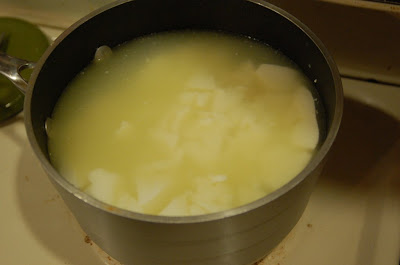 It doesn't really matter, though, because when you scoop out the curd using a slotted spoon, it won't hold its shape anyway: 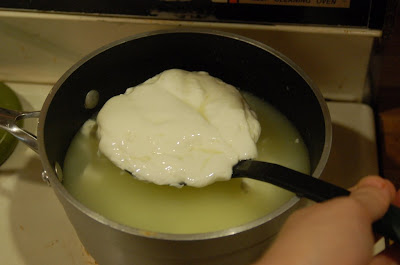 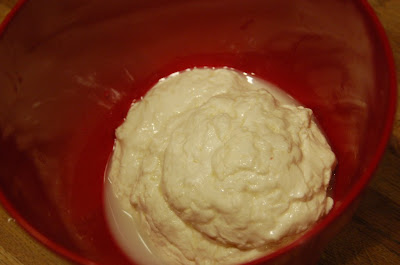 OK, Miss Muffet fans, what had we just done?? Separated the CURD from the WHEY. Watch for spiders.

As you scoop the curd, squeeze as much liquid as possible from the curd. This won't be easy. Once the curd's in the bowl, even more whey will drain out of it. Pour as much whey as you can back into the pot of whey. Form the curd into one ball or a few smaller balls.

Put the pot of whey back on the stove, and heat till not-quite-boiling. Dip a ball into the hot whey until heated, then take it out and knead or stretch it until it cools and ceases to be pliable. This motion is working out more whey from the curd. You'll have to do this 5 or so times. Rumor has it, this is where you'd salt your cheese. My directions didn't exactly say when to do it, and I forgot. I recommend adding some salt- the resulting salt-less cheese is kinda tasteless. 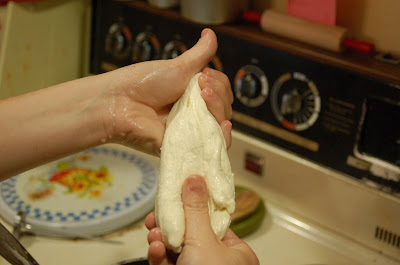 When you've finally reached "fresh mozzarella consistency," heat the ball one last time, and form it into a well-shaped ball. Dip in ice water to cool, and store in water or wrapped tightly in the fridge. A half-gallon of milk created a ball of cheese bigger than a tennis ball but smaller than a baseball. 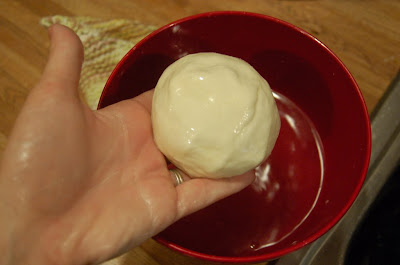 As for me? The cheese didn't last long. Less than 24 hours, in fact. With fresh tomatoes around, that is to be expected. 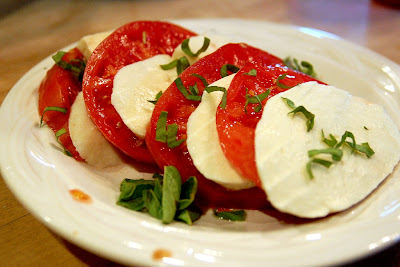 I've been on vacation half the week, so I'm late to the party, but it's Going Local Week 2009!

I kicked it off Sunday morning with a breakfast sandwich including eggs from a friends' farm and tomatoes from my backyard. 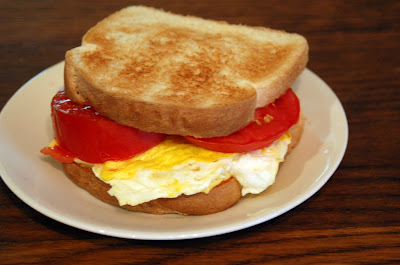 Over the weekend, I visited the Carmel cupcake shop Holy Cow Cupcakes that uses all local fruits in her cupcakes, as well as organic butter & milk. 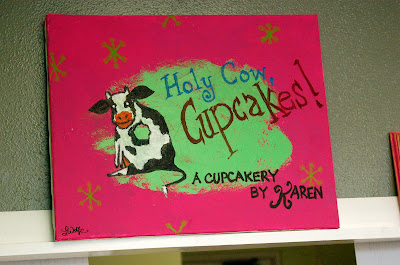 Last night's dinner, though, was the Best Thing Ever: a Caprese salad with tomatoes & basil from my backyard, and homemade mozzarella cheese. This is what I've waited all summer for, seriously. I bought the cheese-making supplies in anticipation of it in early May.

What local foods have you enjoyed this week?
Posted by Joanna at 8:55 AM 5 comments:

Last Month, I ate at home for more consecutive days than I have in as long as I can remember. It was a small feat, to be sure, since most normal people I know do this on a regular basis. I updated the meals list as the month went on to show what we actually ate (as opposed to the original plans I had)

Did we eat anything fancy? No. Could we have eaten healthier? Yes. Is any meal at home healthier than eating at a restaurant? I'd argue, most of the time. Portions at home are much smaller, and I eat less (almost no) fried food at home, and almost always have something fried when I eat out.

So what did I learn?
Part of the goal last month was to eat from our pantry and freezer exclusively. I ended up spending about $30 on groceries the entire month, replacing staples. This part of the experiment was a success. I also discovered it's almost impossible to plan ahead of time from what groceries I'll need- By August 31st, I was totally out of eggs and butter drinks, and the pantry and freezer were considerably more empty. That said, I was impressed  how much food we keep on hand. This "clearing out" month was good for us.

I learned that the convenience foods were the first to go, and I had to increasingly cook from scratch more and more as the month went on. I guess I'm lazy- I took the easy way out many times early in the month.

I learned that, if we eat at home more  and I'm cooking from scratch, I do a LOT more dishes. Luckily I have a wonderful husband who helped me out on this one. Canning projects also dirtied a good number of dishes, adding to the load.

The biggest thing is, I learned it can be done. Even in the midst of working and get-togethers and family events and church responsibilities and lessons, dinner can be on the table. It's not anything elaborate most nights, it's just simple and filling and good family time together.

Needless to say, September 1st, with an empty pantry and freezer and no meal plan to speak of, we ate out at one of our favorite restaurants. I felt it was deserved.
Posted by Joanna at 10:41 AM 9 comments:

“The Sunflower is not only beautiful but useful. The seeds offer sustenance, the leaves nurture growth and life. Sunflowers always seek the light....The sunflower is a favorite emblem of constancy.”-- Thomas Bulfinch